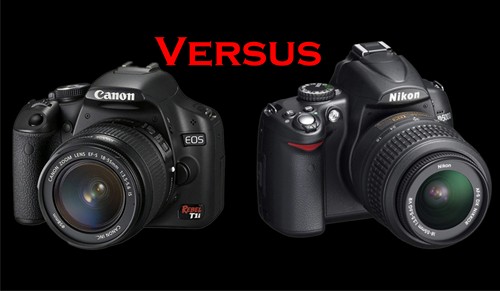 The launch of the beginner DSLRs like the Canon 500D and the Nikon D5000 at almost the same time may confuse consumers. Besides the titles using the numbers 5 & 0 and the letter D, they both have video recording capabilities and has a similar sticker price. So which of these two is most suitable for you?


Superiority of the Canon 500D Superiority of the Canon 500D


While the Nikon D5000 is superior in these points: Superiority of the Nikon D5000

– 360-degree rotatable LCD screen.
– A faster 4 frames per second photographing speed rate (compared to the 500D’s 3.4 fps).
– Has 11 focus points (the 500D has 9 focus points).
– Has a taller body, making it easier and more sturdy to grasp.
– Has 19 scene selections that are usually only available in point-and-shoot cameras.
Practical analysis based on observation and experience


The image resolution of the Canon is 3 MP higher. However, this does not necessarily mean the image produced is better. In fact, it’s the same as the 10MP and the extra 3 MP will take up more storage space. But sometimes higher resolution can help us when cropping a photograph is needed. For example, when photographing a sport event where you have no time to compose the photograph as your artistic vision see fit.


The ISO 12800 also does not mean the photographs will come out better. Usually, a camera with a small sensor, the ISO 3200 is the maximum setting for a good photographic result. More than that, there will be too much noise visible, making the photograph less sharp and lose its details.


The difference in the amount of focus points is also not very significant because the spreading of auto focus points between the two are almost the same.


So then what’s the significant difference between the two?


That would be the features concerning the video mode.The Nikon D5000 has a rotatable LCD screen, easing the process of recording videos or photographing at difficult angles. For example, photographing above heads and at feet level is made easier. This type of LCD screen also helps in self-recording. But it’s a bit unfortunate that the Nikon D5000 screen goes down instead of to the side like the Olympus E-620 or other super zoom cameras. The down side with this is, when using a tripod, the screen is blocked by the tripod legs.


On the other hand, the Canon 500D screen are a bit wider and is way clearer and sharper. This is more important because it’s better for checking if the photographs taken had the right focus or not. This is especially important for those who prefers photographing with wide-aperture lenses such as an f/1.8 or f/1.4.
In addition, the Canon 500D can record video for up to 18 minutes in a row; while the Nikon can only do so for 5 minutes. Five minutes may be enough for some, but I feel that that’s too brief. For a Youtube video for example, 10 minutes is the standard duration.


The Canon 500D can also record in full HD, though only in 20fps. The video will look a bit chopping, so this isn’t a significant advantage when comparing to the Nikon D5000.
Another interesting point to mention is the scene modes on the Nikon D5000 is more than that offered on the Canon 500D. This shows that the Nikon D5000 is designed to smooth the transition of users from compact point-and-shoot cameras to a more advanced yet affordable DSLR system. 
Judging from the specs alone, the Canon 500D has overall more advantages both technically and when it comes to compatibility. But when it comes to every consumer, of course the answer will vary. For instance, if you’re more keen on using the live view mode like in a compact point-and-shoot, then the Nikon D5000 is the better choice because of its rotatable screen. And also, the live view has an auto focus that can follow object (the effectiveness is unknown).


As for those more experienced DSLR users and is more keen on using the view finder to compose the image, then the Canon 500D is the better choice because it has a wider and crisper view finder.
Then the lens compatibility is also something to consider. The Nikon D5000 only supports AF-S-type Nikon lenses. Even though there are plenty of new AF-S lens types, there are also many lengendary Nikon lenses that doesn’t; like the prime (non-zoom) 50mm f/1.8 mm that are relatively cheap but has a high performance compared to other Nikon lenses. Even though you’ll still be able to use non AF-S lenses, you’ll have to use manual focus when mounting these lenses on a D5000.


For users who already own lenses of certain brands, there’s good in considering buying a lens that’s the same brand as the DSLR body. This is because, I think, the difference between the two cameras aren’t very significant.


Besides technical pints, emotional and other aspects also come into consideration. For instance, the grip of a Nikon is more comfortable for the hand, or the placement of the buttons and the design of the Canon better fits your preference.


Conclusion
For those who’s transitioning from a compact point-and-shoot camera to a DSLR for the first time, the D5000 might be the way to go. On the other hand, if you’re a rather experienced DSLR user and would like to experiment witn video recording, then the Canon 500D is the better choice.
But it’s a certainty that these two models are aimed for beginners and the two provides pretty good added value compared to cameras of the previous years.
I hope these information help in making the right decision for you!