The Nikon D300s may have only been an HD movie feature upgrade from its D300 predecessor, but the D300s still holds the title as Nikon’s most advanced APS-C DSLR. This semi-pro camera has superiority in its AF points with a maximum of 51 points, and the D300s is equipped with dual memory card slots. On the other hand, the Canon EOS 7D is a surprise release by Canon after deemed unsuccessful with their EOS 50D. The EOS 7D has become the APS-C DSLR with the highest resolution in history, with its 18 MP resolution (50% higher than the Nikon D300s’ 12 MP) and the EOS 7D fixed the main flaw of the 50D in its few amount of focus points (from 9 points to 19 auto focus points). 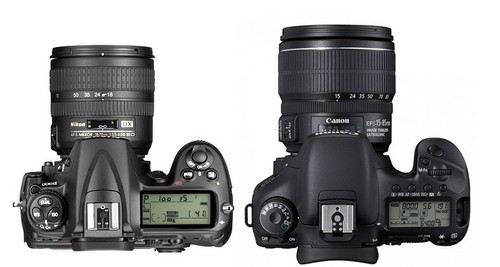 Both the D300s and the EOS 7D are high-end cameras with a magnesium alloy body; sturdy and tough for outdoor use and have 100% viewfinder coverage. From the exterior, both look similar with their 3-inch high resolution LCD. From the top, both are equipped with a top LCD. As for their interiors, they have many similarities. The shutter units have been tested to a grueling 150,000 shots triggered, both are capable of supporting wireless flash, and they both feature a virtual horizon. As for performance, both are fast cameras with the ability of 7 fps. Even though they are both able to use an ISO of up to 6400 (7D is even capable of being forced to ISO 12800), the APS-C sensor has an actual safe limit of ISO 3200 (limit in which they take a good photograph).

The fundamental differences between the two are quite minor. The CMOS sensor of the EOS 7D that’s equipped with 18 million pixels may be an overdone or it may even be a flaw of this EOS 7D. If the need for ultra-high resolution is high, then the 7D is the better choice rather than buying a more expensive full-frame 24 MP DSLR. The EOS 7D is also faster with its 8 fps, even when using the 14-bit RAW. Not to mention the HD video (1080i or 720p) capability and frame rate (30 or 24 fps), while the Nikon D300s only provides its user with 720p 24 fps. The EOS 7D also has a histogram while in live-view mode; very useful in evaluating the correct exposure.


The Nikon D300s excels in its flexible dual memory card slots fro back ups and managing photo files. The D300s also provides an option to store RAW files in one memory card, while storing the JPEG in the other one. The D300s also has many AF points (51 points); though the EOS 7D introduced the AF zone in its 19 points. The D300s has many unique features like photographing in stealth mode with quiet shutter release.

Here’s most of the main features Nikon D300s:


This post was written only to illustrate the similarities and differences between these two high-end DSLRs from Nikon and Canon and was never intended as a guide to buying a semi-professional DSLR camera. The reason being that choosing between these $2000 USD DSLRs is a decision that’s usually made by serious photographers (its main target consumers) and they usually know what and why they have chosen between the two; and they own various accessories of the same brand to back up their choice. But if there is a person amongst the readers who are undecided between choosing the EOS 7D vs the Nikon D300s, then believe me, whichever you choose will satisfy you and will further get you addicted to taking photographs.