This is a fierce battle between two middle class DSLRs for this year. Nikon’s D7000 (D90’s successor) goes against Canon’s EOS 60D (somewhat of 50D’s successor, though in some aspects, the real 50D successor is the 7D). Although for starters I will that they are equally good, of course the features may differ slightly. Read on to read the duel of these two giants.

Judging from appearances, the Nikon D7000 looks a little smaller than the Canon EOS 60D. The main difference being that the Nikon D7000 uses a magnesium-alloy material, while the Canon EOS 60D uses a polycarbonate resin (plastic). Both has similar designs, especially in the placements of the mode dial and the top LCD screens. The mid-class Nikons has a scroll dial placed on the front and can be toggled using the index finger; while the Canon always places their scroll dials near the shutter button. 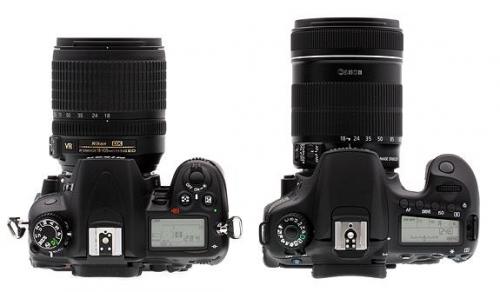 What’s mainly visible on the back is the placement of the Nikon D7000 buttons. These buttons consist of 4 buttons lined to the left of the screen; while the Canon EOS 60D with its rotatable screen system makes it not possible for any buttons to be on the left of the screen. The rotate dial on the back that is operated by the thumb differs in design, in that the Canon EOS 60D uses a wheel system like how is seen on professional-class Canon DSLRs.
Before discussing the differences in features and performances of the two, it’s better to see the head-to-head summary of the Nikon D7000 versus the Canon EOS 60D. They are the following: Judging from the sensors, even though the Nikon D7000 loses in terms of resolutions, but in reality the difference between 16MP and 18MP isn’t significant (16 MP = 4928 x 3264 while 18 MP = 5184 x 3456). The burst performance of the two are also relatively equal between 5 to 6 fps; which are not too fast but not too slow. Fro the above table it’s apparent that the two are tied in the maximum shutter speed and flash sync; with a side note that the FP mode of the flash sync on the Nikon D7000 can be increased to 1/320 second. The ISO capabilities of the two are both at a maximum of ISO 6400 (maximum setting for adequate photographs) but both can also be forced to take shots beyond that setting with a risk of bad results. Therefore, it seems that ISO 128000 or ISO 25600 isn’t really necessary.


On paper, the Nikon D7000 is superior when it comes to auto focus and metering, with 39 AF points (9 of which are cross-type) and 2015 pixels of metering plus accurate 3D AF tracking. On the other hand, the EOS 60D only has a 9-point AF; all of which are cross-type (even the EOS 7D only has 19 point AF). As for metering, the 60D relies on a 63 area zone metering. In practice, a higher digit does mean better accuracy, but the results highly depends on the photographer and shooting conditions.

Key advantages of the Nikon D7000
One thing that is indisputable is the professional feel when seeing and using the Nikon D7000. Professionals can even rely on the sturdy body, covered with weather seals as well as dual memory slots. Another thing, the existence of the various buttons and directs controls are a favorite amongst the professional photographers.


Key advantages of the Canon EOS 60D
If the purpose of purchasing a DSLR is to maximize performance of video recording, then the 60D surpasses the Nikon D7000 in that respect. With the foldable and rotatable LCD screen, shooting video or photographs with the live view mode is made easier. And then there are the various video resolution options and the maximum frame rate of 1920 x 1080 pixels and 30 fps. Another key advantage of the 60D is the more affordable price. Right now, the 60D kit is priced at around $1000 USD while the Nikon D7000 is priced at around $1250 USD.


Minor flaws of the Nikon D7000
Nothing is ever perfect. There are a few minor flaws that is quite unfortunate for a DSLR as wholesome as the D7000. Some of these flaws are the absence of the histogram in the live view (even all point-and-shoot cameras has this feature) and the optic viewfinder does not showcase the ISO setting (the 60D has this feature).


Minor flaws of the Canon EOS 60D
For a camera that inherited all the feature of the big two-digit EOS series, Canon shouldn’t have removed the micro AF Adjust feature for the Canon EOS 60D. Without this feature, front-focus or back-focus occurs when using some lenses and it can’t be recalibrated (a feature available in Nikon D7000).


Conclusion
Both cameras are great and can be purchased as your first DSLR or as an upgrade (for example, from a Nikon D40/D60/D70/D80/D90/D3000/D5000 or EOS 400D/450D/500D) but if you already own a 40D or 50D, it’s better to upgrade to an EOS 7D. The quality of the photographs and videos from these two DSLRs can’t be doubted. Both sensors are capable of producing high resolutions and the video features are enough to even make a professional-looking video clips. Performances of both are also quite fast, especially if the photographer can maximize the use of the buttons, rotary controls, and levers located on different sides of the camera body.


The Nikon D7000 should be more accurate when it comes to auto focus and metering, even though the 60D can’t lose when it comes to real-world practice. The best choice can be made by referring to your budget, plans of usage (more outdoor or indoor studio shoots), plans for lenses (if purchasing DSLR body only) and if a foldable LCD screen is something you would need.