Reported by Chinasmack, there was a dramatic fall out in Dongmen old street, Shenzhen, China. Initially, there was a man who was going to have a pre-wedding photo shoot waiting for his bride-to be to get ready with her makeup.


Not long after, this man was shocked to see his fiancée. Indeed, she was wearing her beautiful wedding dress but she was in an old lady or granny makeup. She whitened her hair and created some fake wrinkles on her face. This woman wanted to put her groom on test for his devotion and whether he would still love her even when her face is full of wrinkles when she reaches the age of 70.


Actually, the man had persuaded her to re-change her makeup but the woman refused to do it. She insisted that she wore it to test his love and faithfulness till they get older in the future. The man became so emotional and got very angry then left the woman in front of onlookers who gather there.


The woman could only weep in agony letting people to watch their fight like a scene from a movie. There were some people who took pity on her and helped the woman leaving that place to calm herself.


1. The bride was deliberately wearing a makeup that made her look like an old woman for their pre-wedding shoot. 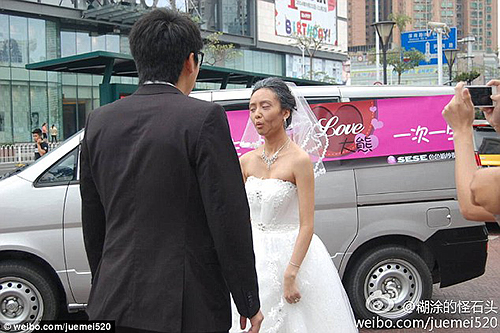 2. She asked her fiancé if he would love her until she is 70. If he promised that he will then the man should have no objection to shoot with his fiancée in such condition.

3. But the man refused to accept it. He hated to see his woman in that makeup. He hated to see his woman in that makeup

4. The onlookers or witnesses who were present there confessed that the man initially asked her fiancée to erase her makeup immediately but she refused to do so. He became so angry and even tossed his glasses in rage. He became so angry and even tossed his glasses in rage

5. After that incident, the woman even had an opportunity to tell a journalist who was coincidentally there and saw the whole drama that the man is actually a flirt who love to woo other women. However, she still wanted to marry him because he treated her so well. She still wanted to marry him

6. And she was still adamant on her decision not to erase her makeup. 7. At last, she was left just like that, weeping on the street. She was left weeping on the street

Here is the video of the incident: