1.Barbie Camera
If you’re a fan of cameras, but don’t want to own one that looks like a camera, you have to check out these new merchandise from Barbie. Called the Fashion Photo Barbie, this camera is designed in the shape of a Barbie doll. So it’s basically a Barbie Doll with camera features. This camera is equipped with 5 MP resolution and a small LCD screen on the doll’s chest for a live view. And if your shots are bland, the camera is also equipped with 15 built-in effects to customize your results. This camera doesn’t come close to replacing your DSLR, or even an iPhone, but for a child that loves Barbies, this is a great addition to their toybox. Fashion Photo Barbie can save up to 100 images, and comes with a mini USB port for uploads and charging of batteries. If you’re planning on purchasing one, it’ll only cost you around 50 USD. 2.Pentax LX Special GOLD Edition, 1981
This special edition Pentax LX is coated with 18 Karat Gold. It was launched in 1981 to celebrate the selling of 100 million standard Pentax LX SLR. There were only 300 units produced, each sold encased in a wooden box and a pair of silk gloves for halding. 3.The NIKKOR Pistol
This camera is named the DORYU 2-16 Camera Pistol and is a 16mm video camera pistol launched by the Japanese police department. This pistol camera is equipped with a 25 mm f1.4 Cine-NIKKOR lens. This camera is very rare and almost impossible to come by.

4.The Third Eye Camera
Artist Wayne Martin Belger is the man behind these two bizarre cameras. You can tell of how bizarre they are just by looking at it. This artist constructed this camera with a hole at the top using materials such as aluminum, titanium, brass, silver, precious gems, and a skull of a 13 year old girl. The last photo above was taken using this Third Eye camera. 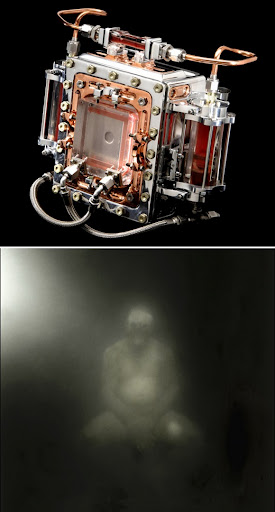 5.The Untouchable Camera
This may just be the most twisted camera ever created. This camera was created by Mr. Belger to immortalize HIV patients. He filled parts of the camera with HIV-positive blood. “The blood is pumped into the front part of the lens and is then serves as a number 25 Red filter,” he says.