To be a photographer journalistic is not an easy job. Any difficult situation should be faced and their duty is to take good photos from there. It must be not easy to take photos in such crowded and uncontrollable chaos. There are some tips on photojournalistic to shoot during chaos as well as normal moments and create photos with maximum results.


In such moment, though it will be very interesting and challenging to immortalize the event, it has to be noted in mind that your safety is still the priority.


James Nachway- a war photographer who was also an anti-war said, there are two possibilities why war or conflict journalists die on duty, first, because the photographer is a rookie who is challenged by the heroic situation. He is involved in the conflict situation positioning himself as a target.


The second, it can be because he is an experienced photographer who has been covering wars and conflicts so many times so he thinks he has 7 lives. He forgets that he has successfully escaped from death for six times and he is not aware of danger in front of him.


But, if you are not a war or conflict photographer that moves from one country to another, riots are usually found during demonstration, wildfire, eviction and brawl.


If you find a situation on field where there is a clash between apparatus and citizens (for example stone war), find safe positions like canal or fence between the both sides. Use long lens to prepare yourself from the worst possibility. However, wide lens should be always in hand to prepare when there are victims that fall in front of you.


But if the clash happens in short distance and even involves body contact where everyone pulls each other, the middle position becomes interesting. If you cannot find an empty space because the large number of journalists, it is best to take a position behind an officer. By doing so, you will be able to take images of the demonstrators from the perspective of the officer. The plus point is it will be less chaotic and crowded compared to when you are in the middle of demonstrators.


Try to always stick your eyes on the view finder, your hand on the shutter and apply in continuous shoot. You should never miss important moments that happen in a matter of seconds that will go by just like that.


Get into the situation that takes place. Feel the heroic side of it and record the event with your heart and soul through your camera. 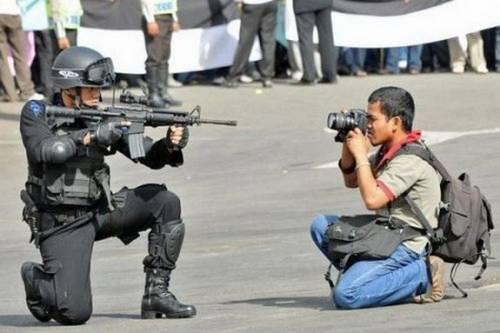 2. Shooting in normal conditions
This kind of situation is when there is a chaos but it is still controllable. It is just temporarily and momentarily. For example, a press conference or other important moments where the place is flooded by journalists and it is so crowded and people thrust each other. Practically, it is like taking a shoot of corruptor arrest, politic champagne, court assembly that take public attentions like a reconstruction of a murder case and degree of evidence.


In this kind of situation, chaos happens among the journalists themselves. Photographers will need to compete with television cameras and reporters, governmental staffs or even bodyguards. There can be more than dozens and even hundreds of people.


In this very uncontrollable condition, commonly people will need to use their strengths to get as close as possible. It gets harder when the guards are arrogantly covering the person on the spotlight and preventing us to get close and fending our cameras.


If you think you cannot use your strength against all people present there, the solution is to come earlier and book your own space. If you still face a difficulty, use long lenses. Shoot the crowd surrounding the figure until he looks up so that you can clearly see his face. And if you fail to do it, just pray you will get good photos.