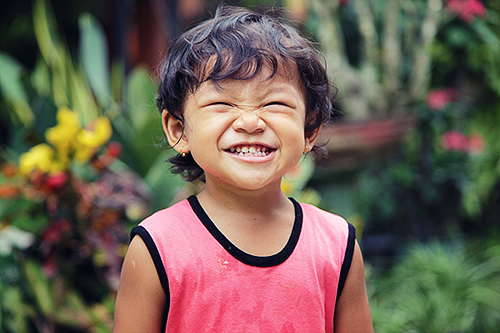 Shooting children can be a challenge somehow. They tend to get very difficult to manage and control and they usually feel scared and ashamed when they meet new people or strangers like photographer. The key success of taking good shots of children is to let them act spontaneously.


When we instruct them to act out certain poses, they tend to lose spontaneity and confidence. Let them act and express themselves spontaneously in front of camera. The easiest way is by asking them to play peek-a-boo, and if they are too old for this game, try to get them into conversation. Ask their names, their fathers’ and mothers’ names, their hobbies and etc, and let things flow naturally then take snap shots.


There are some tips and tricks on shooting children’s expressions spontaneously and naturally presented as follows:

1. Because the postures of the photographer and the child are different, try to adjust the position of the camera with their eye level if you want to have their body look proportional on photograph (the head does not look bigger than other body parts), you can squat or lay down instead if you like to capture a certain angle and effect.


2. Make use of stuff like toys children love. There are some of them who do not like to pose naturally especially when they notice of being photographed. If they appear to be nervous, ashamed and awkward when you shoot them, give them toys they like. Toys are the most effective tools to set them in good mood. If they like to play dolls give them dolls and if they love playing cars, give them car toys. If there are no toys to offer, you can use chair, books or even crayons to let them draw stuff. It will help them get distracted and forget that they are being photographed and begin to express themselves spontaneously.


3. Be a communicative photographer. Since every child has their own aspiration for the future or favorite cartoon character, you can ask them about it. It can be anything, be it engineer, doctor, soccer player, army, teacher or even Naruto, superman, and batman. You may also offer them to wear costumes based on their very own aspiration or favorite cartoon’s characters and they will start fantasizing in their own world and their awkwardness will simply disappear. You can stimulate them by saying “Come on superman, show us how you fly” and then take a snap shot.


4. Do not force them to smile. When you ask them to say “cheers” the resulted smile will appear unnatural and forced and the lips will look stiff. A good pose can always be without the presence of smile and some children do have certain serious face expressions since their birth.