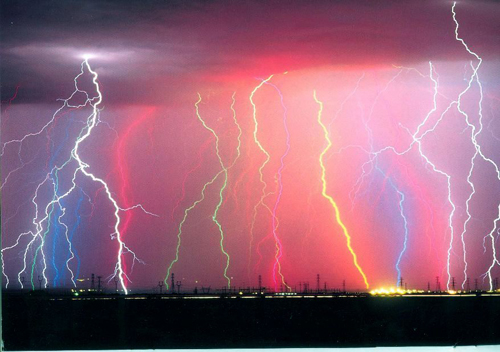 Photographing a lightning is a dangerous hobby. What most people do not understand, is that lightnings are unpredictable and they could strike down any time, anywhere. At the same time, taking a picture of a lightning storm can be very rewarding, especially if the lightning pattern is unique or the picture is taken at an extraordinary location.

1. Use a Steady Surface
While a tripod typically works best, in reality any steady surface will work. Some people use a beanbag or other malleable item, like a pillow.

2.Prepare Your Gear
If you want a very good picture of lightning, a DSLR with a tripod is almost a must. If you have a point and shoot, make sure that the camera can be configured for manual control of shutter speed and aperture. Some people are lucky to have a good image of a thunderbolt in hand, but I strongly advice to use a tripod instead. Depending on the amount of ambient light, you have to use a shutter speed between 30 to 30 seconds and shake any potential negative impact on image sharpness. Either lens would work, but wide angle and zoom lenses work best because you can put more while having the flexibility to change the focal length and target a specific area. A remote cable release or an infrared remote (depending on your camera) is strongly recommended if you want to avoid camera shake, even on a tripod. If the lightning is far away, having a flashlight with you might be useful, since you can “paint” your foreground subject to make the whole scene look more dramatic.

3.Slow Shutter Speeds
Although lightning is unpredictable, it is extremely difficult to capture a decent shutter release when you see a flash. There are some fancy remote controls that have the ability to travel when the flash is felt, but I’m guessing you do not want to invest in these types of gadgets. Depending on your ability to manage cameras noise at slow speeds, using a 30 seconds time can work well. The configuration of the bulb can also be useful if you have a way to keep the shutter open.

4.Manual Mode
Set your camera to full manual mode. In manual mode, you control both the aperture and the shutter speed. I would not trust the camera’s metering system, simply because periodic lightnings will brighten up the area and your camera might give an incorrect exposure. Start at the shutter speed of 3-5 seconds and f/8 and see how the image comes out. If you are in a dark area, you might want to decrease the shutter speed all the way to 15-30 seconds, while in areas with plenty of light, you will have to stop down the lens to f/16 or more to allow longer exposures without overexposing the entire scene.

5.Horizon Up
It’s safe to say most of the lightning action you will see will in the sky. I know it’s obvious, but it needs to be stated that your field of view will be skewed toward the sky then. Depending on how close the lightning is, you’ll be including more blank looking sky than normal. But fear not; that sky becomes far more exciting when the lightning starts

6.But Include Something Interesting
While the action will be in the sky, don’t forget to keep something in the frame to give relevance and perspective to the shot. Buildings are a favorite, but really, anything that can give an idea of the size of the storm works well.

7.Be Patient
I typically take many shots (shot after shot), pointing my lens at the same location. Sometimes you might get nothing, sometimes you might get an awesome shot. Be patient, This is a big one and a key to success. Get familiar with your gear and settings so when there is a lightning storm you can set up the camera and then let it do its thing while you enjoy the show. You’re going to have a number of times when you miss “the shot” for one reason or another. Don’t sweat it. How to Take Spectacular Lightning Pictures #2

One Response to “How to Take Spectacular Lightning Pictures”