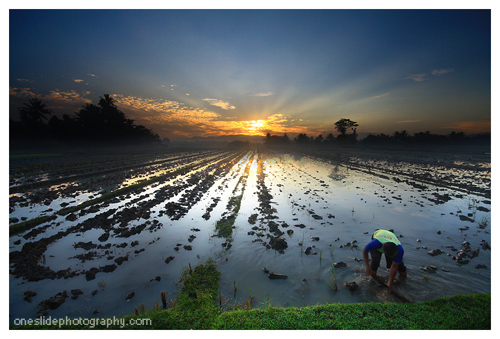 A Beginner's Guide To Landscape Photography

Using diagonal lines can be a very effective way of drawing the eye of those viewing an image into it and to the main focal point.
The ‘lines’ need not be actual lines – they could be the shape of a path, a line of trees, a fence, river or any other feature in an image.
Converging lines (two or more lines coming from different parts of an image to a single point) can be all the more effective. “Positioning key aspects of a landscape on points of a geometric shape hep create a balanced composition.” Perhaps the most common and easiest way to do this is to use a ‘triangle’ shape between objects in an image with three objects in a frame positioned with one to each side and one more central.
Using Geographic Shapes in this way isn’t something that I’ve done a lot of – but it is one technique to get balance in a shot and if you’re clever, to lead the eye into it (in a similar way to the diagonal lines rule above).
You can see this illustrated (to a point) in the photomontage image to the right.


Rule-Of-Thirds
3.The Rule of Third The Rule of Thirds

The Rule of Thirds gets trotted out more often than any other in all types of photography and is one of the first rules of composition taught to most photography students. While sometimes it can feel a little cliche it can also be a very effective technique in landscapes (although keep in mind that breaking this (and other rules) can also produce dramatic and interesting shots).
Position key points of interest in a landscape on the intersecting point between imaginary ‘third’ points in an image and you’ll help give your image balance and help those focal points to really capture attention. 
Rules are Made to Be Broken?
Of course while knowing the rules can be important – knowing when to use them and when to break them is a talent that great photographers generally have.
Practice these techniques – but don’t get so worked up about them that they kill the creativity that you have.