Because of this short lighting duration, it is possible to freeze the object of the photo, even with a relatively slow shutter speed (1/60 second, for example) in a low lighting condition.
In brightly lit environments such as outdoors in the sun, this trick does not apply because a slow shutter speed will capture an object’s movement instead of freezing it.


Therefore, if for example we want to freeze the object of the photo in a relatively dark environment, we can utilize the flash unit. 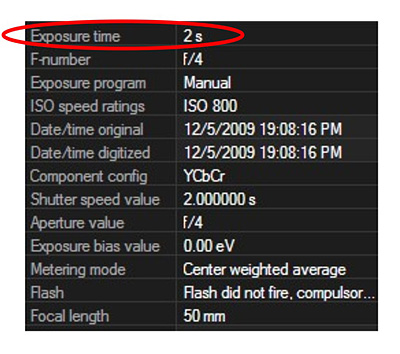 The above photographs were created using slow shutter speeds. The EXIFF data shows the shutter speed as 2 seconds. The photo is however able to freeze the scene with the help of a flash device. The photo was taken in a dark setting, with a flash device to the left of the object. The camera shutter is triggered before the object is dropped into the water. When the object touches the water, the flash is activated. This then allows the light emitting from the flash to freeze any object it illuminates, regardless of the slow shutter speed.